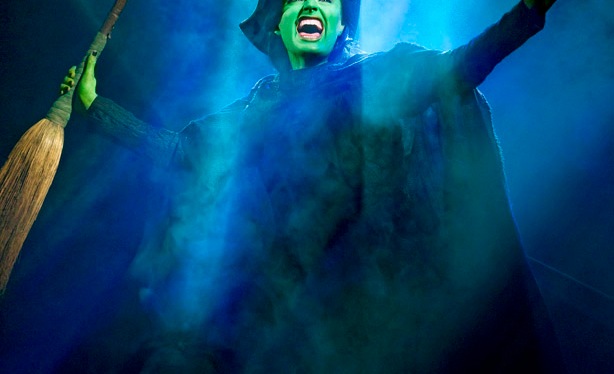 Ever wished you could slip into some of those gorgeous theatre costumes that West End and Broadway actors get to wear every day? Well, Halloween is your chance to do just that! (On a smaller budget, of course.) Here are some perfect Halloween costumes inspired by shows currently playing in the West End:

There’s no more perfect Halloween costume than the gravity-defying star of Wicked. Elphaba wears several different costumes throughout the play, so this costume can be as simple or as elaborate as you prefer – just as long as you paint your skin green. Grab a broom for extra props (no pun intended). And if you get your friend to dress up as Glinda, you’re doing it right.

The Phantom of the Opera

The Phantom himself obviously enjoys dressing up: whether it’s as The Red Death, Piangi, or just himself (he’s pretty fabulous in that cape). You don’t have to wear his Red Death Masquerade costume (though if you do, please send us pics). Just a cape and half-face mask will do. If you want a prop, you can carry around a Punjab lasso – but please resist the urge to murder anyone (especially the boyfriend of your ex-lover).

With the popularity of the new West End production of Young Frankenstein, Doctor Frankenstein… er, we mean Fronkinshteen… and his monster are once again in the limelight. Maybe you want to dress as Doctor Frankenstein so you can wear those huge black gloves. Then again, maybe the Monster is more your thing. (Or hey, maybe you’re more of an Igor. We won’t judge.)

If you’re desperately searching for last minute costume ideas, and you happen to have a white shirt and slacks in your closet, you can channel The Book of Mormon musical. Just add a tie and a name tag (which you can easily make out of cardboard or construction paper). Of course, to make the outfit, you’re going to need a Book of Mormon to tote around.

Have you caught Disney’s Aladdin yet? Even if you haven’t, you can still go as Aladdin – that lovable street-rat – or as Princess Jasmine for Halloween.

Then again, if you want to look really fabulous, you can dress up as Charlie Price from Kinky Boots. As in, Charlie Price at the Milan fashion show – which means you’ll need to practice walking around in those knee-high kinky boots.

Lately, the West End has been practically bursting with Hamlet productions: starring such big names as Andrew Scott and Tom Hiddleston (did anyone actually get a ticket to that latter one?). Dressing up as Hamlet is original and easy – provided you’ve got some black clothes and a skull lying around. Before going out on Halloween night, practice holding up the skull in one hand and saying, “Alas, poor Yorick!”

If you go with a theatre-inspired Halloween costume this year, we want to hear about it! Pics or it didn’t happen….