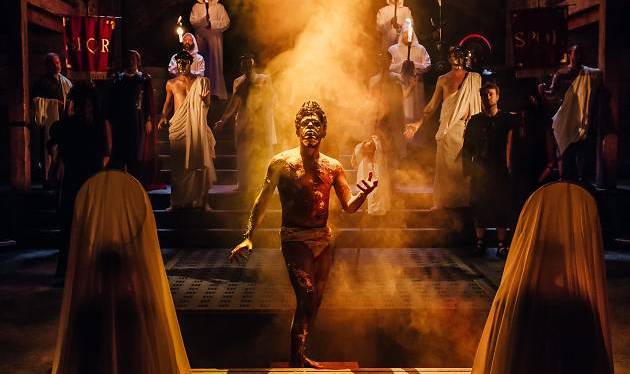 This summer, acclaimed historical thriller IMPERIUM transfers to the West End for a limited engagement from 14 June to 8 September. The Royal Shakespeare Company and Playful Productions are bringing this two-part adaptation of Robert Harris‘ best-selling Cicero trilogy to the Gielgud Theatre in London after a sold-out run in Stratford-Upon-Avon.

Today, Cicero is known as the greatest orator of the late Roman Republic. In his time, he was a leading politician whose miscalculations brought dire consequences. Told through the watchful eyes of Cicero’s secretary, Tiro, the first part of IMPERIUM (I: Conspirator) chronicles Cicero’s rise to fame and shows how his success unwittingly paves the way for the Republic’s brutal and bloody end. In the second part (II: Dictator), Cicero must exert all his brilliance to bring order to a now chaotic Rome and restore the power of the Senate. But the threat of disaster looms ever closer as the civic mob seeks to elect an Emperor of their own choosing. His name? Gaius Julius Caesar.

Mike Poulton – RSC Associate Artist whose works include adaptations of Euripides, Ibsen, Chekhov, Schiller, and Strindberg – has adapted Robert Harris’ thrilling Cicero trilogy as six one-act plays presented in two performances. Other previous adaptations by Poulton include Malory’s Morte d’Arthur, Chaucer’s Canterbury Tales, and Hilary Mantel’s novels Wolf Hall and Bring Up The Bodies. The latter two were also co-produced by the Royal Shakespeare Company and Playful Productions, and enjoyed success at the Aldwych Theatre in Stratford before transferring to Broadway in 2015.

Director Gregory Doran has been the Royal Shakespeare Company’s Artistic Director since 2012, where he has produced over 27 major Shakespearean works, classics from the UK and abroad, and a season of Jacobean plays which won an Olivier Award in 2002.

Imperium opens at the Gielgud Theatre on 14 June – book your tickets today!