Following an immensely successful run at the Almeida Theatre, we asked ‘Summer and Smoke’ director Rebecca Frecknall how it feels to see her latest production of the play transfer to the Duke of York’s Theatre…

Your production of Tennessee Williams’ classic has achieved incredible success, when you decided to work on this play for a second time, did you imagine that it would garner such critical acclaim?
Never! If someone had told me the week I started rehearsals at the Almeida what the trajectory of this production would be I would never have believed them. I was just thrilled to have the backing and trust of the Almeida and to be able to have the opportunity to make this piece in the way that I wanted. The way it was received took me completely by surprise. I’m still pinching myself!

Was working on the play easier the second time around?
Yes in many ways. It was great to be able to go into rehearsals knowing the play so well and so intimately and with a much clearer idea of why I was doing it and what I wanted to achieve. I had such a brilliant team around me too and we very much made the show together. Obviously the stakes were much higher the second time round as this was my first big production in London and I really wanted to prove myself and make something special. The pressure can make things harder but we all loved what we were doing so it was easy to have moments of forgetting what a big deal it was for me!

You’ve said in previous interviews that you started out dreaming of acting in theatre productions, is that a dream that we’re ever likely to see you revisit?
No! Definitely not. Honestly, the first time I ever directed something (it was in my first term of university) I knew that was what I was built for. I suppose I had wanted to be an actor when I was younger because I loved plays and the theatre so much and I maybe confused the two. It’s definitely the creating that I’m addicted to, I’ll leave the acting to the experts and stay in awe of them.

This is the first show that you’ve directed and taken to the West End – how does it feel?
Unreal. I honestly don’t think it’ll really sink in that it’s transferring to the West End until it opens and people (hopefully) start turning up to see it!

Your love for theatre started with musicals, could we ever see you working on or directing one?
I would really love to direct a musical one day. I was a complete musicals nut when I was a teenager and I think I probably owe it to my younger self.

Do you have any particular plays that you dream of directing?
Yes of course, I’d love to do more of Tennessee Williams’ work and I also love the plays of Eugene O’Neil and Arthur Miller. I’d love to do a Greek tragedy one day, too, and a Chekhov – the ‘big’ plays I grew up with I suppose. There are of course new playwrights I’d love to work with too. I hugely admire the work of Alice Birch and Cordelia Lynn and think they’re both making important, sophisticated work. 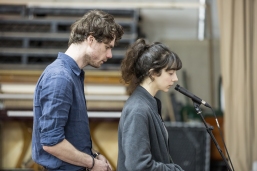 You’ve commented before on the lack of female presence in theatre, did this affect the direction that you took with the production at all, particularly with the character of Alma?
I suppose I am often drawn to plays that have female protagonists. I don’t think that’s an active choice, more a subconscious attraction. In the case of Summer and Smoke I certainly angled my production towards Alma. I wanted the audience to experience the play from her point of view, to be able to take them in and out of her head. I don’t, however, think that Alma’s experiences in the play are specifically female. Lots of young men who saw the production at the Almeida really saw themselves in her.

Was it hard to adapt a play that was written in the 1940s for a modern audience, or did you find that a lot of the themes are still prominent today?
I just really wanted us to focus on the characters and to take away all the trappings and signifiers of the time in which the play was written and set (it’s set in 1916). I didn’t want the audience to be able to take any assumptions about what a ‘Tennessee Williams’ play is into their experience of watching the production either. I think that the fact that we were able to create such an open and exposed production and that people were moved by it is a testament to the fact that Williams’ themes transcend the time in which the play was written.

Do you think if you were to direct the play again in another 5 or 6 years your interpretation or direction would have changed again?
I hope so. I think that as artists we change with time, experience and influence, and therefore the work we make inevitably evolves, changes and hopefully improves! In my 20s I read this play in a particular way. In my 30s this current production is my answer to it. In my 40s…who knows? I’m sure it would speak to me differently.

Summer and Smoke opens next month (November 10th) for a strictly limited engagement. You can get your tickets to the sultry sensation right here!